This isn't good enough for the BBWAA, evidently, or at least their proxies in the broadcast media. I saw Harold Reynolds for a bit on the MLB Network today; he rankled at what he characterized as an attitude of arrogance on behalf of those who would use stats to justify arguing Mike Trout as the AL MVP. I only saw a few minutes; I don't know if he was similarly rankled at those who argued that Miguel Cabrera's Triple Crown was cause to elect him MVP. After all, isn't the Triple Crown a collection of stats?

I saw Sean Casey for a bit on the MLB Network today; his entire pro-Cabrera argument was that the Tigers made the playoffs and the Angels didn't. He wasn't considering strength of offense and defense; he was considering strength of teammates. And so we fall into the situation where the "Most Valuable Player" is a player on team good enough to make the playoffs, but not good enough to make the playoffs to easily: Best Player on a Team that Barely Makes It (or, as we learned when Justin Morneau beat out Joe Mauer in 2006, Player with Most RBI on a Team that Barely Makes It).

The notion that the Trout-Cabrera debate is some stats-traditional debate is a monumentally silly one, of course. You can't make a pro-Cabrera argument without resorting to stats, and until a few years ago the "traditionalists" would have supported the defensive/baserunning dynamo over the one-dimensional slugger. But the only tradition the BBWAA seeks to uphold is their own and their own power; definitions and ideologies do not exist -- hell, facts don't exist (Sean Casey, an employee of Major League Baseball hired to analyze major league baseball on television, said today that Mike Trout was "average at best" in September, a month that [plus October] saw him hit 289/400/500 with 7 SB to 1 CS, all with great defense; the MLB Network should apologize to its viewers for broadcasting such ignorant and ill-prepared drivel).

What exists is the need to persist, as any organization's primary directive is survival. We don't need baseball writers anymore, not the kind that formed the BBWAA in our game's Jurassic age. We can see every game we want, when we want it, we have all the stats at our disposal, the databases, the analysis. It's all open and free and we exchange ideas dozens, hundreds of times per day. We don't need writers to tell us who is best, we can decide on our own now. But this is no good for the writers' power, and so they strike back. Everyone knows that Trout was better than Cabrera in 2012, but the BBWAA is pointless if they're telling you what you know, they have to tell you they know better, that they are the true arbiters of value, not any measure of strength of offense and defense. And once upon a time that meant that the light-hitting shortstops and catchers were more valuable than "we" thought (and in several cases they were), and today it means that baseball's story of the year isn't. It's reactionary and perverse.

There is nothing but inertia that gives the BBWAA's votes any more prestige than the determinations of, say, Baseball America, The Sporting News, or, hell, The Internet Baseball Awards. The voters of the BBWAA don't care about their own voting guidelines, and I see no reason to humor them. If they're going to ignore their guidelines, I say we ignore them, and move on and let the dinosaurs consume themselves.

WHEREIN I WRITE A SEASON PREVIEW

There are two out in the eighth inning. You lead by two. The bases are loaded. Two left-handed batters are due up. The pitcher you have on the mound is right-handed and has a career 7.13 ERA.

If you're not going to put in your multi-million dollar left-handed closer that has only pitched once in the last five days, then why is he even on the roster?

I don't have any words for this. If any of you have been around here for awhile, you know I followed Nick Adenhart from the moment he was drafted:

One intriguing draftee is Nicholas Adenhart, a high school pitcher who measures at 6'4'' (or 6'3'', if you believe Baseball America) and can hit as high as 93 on the gun. The MLB scouting report pegs him as a "definite blue chipper" and a "potential frontline [major league] starter," and BA ranked him as the second-best high school pitcher in the country (he actually held the number one spot for much of the season). Why did he go 413th in the draft? Well, he's having the Tommy John surgery. (The video shows that he has very smooth mechanics, but scouts had idenified him as having a "stiff front side" prior to his injury.) Adenhart has a full ride at North Carolina, and his father speaks glowingly of the chance for him to get an education.

So, is he signable? It will be interesting to see. I would suspect that he'll go to college and up his stock, but you can't blame the Angels for trying, and it may work out.

After he signed, he immediately entered the Watch List I used to do of prospects. And my notices were glowing, as as a pitcher young for his leagues Adenhart always at least held his own or excelled.

I liveblogged his MLB debut last year, which didn't go well, and he struggled when he returned to AAA. I was pretty much out of the blogging game by then, but I wasn't worried -- he was still young for his leagues, and you could see the stuff that he had.

Last night's game demonstrated both his potential and his struggles. He had not yet mastered his command, but had such a live arm, with a good moving fastball, a solid curve, and an excellent change. He had an absolutely marvelous sequence against Jason Giambi with men on base, shocking Giambi and myself with back-to-back changes for a strikeout. I thought it was an absolutely fantastic plate appearance from the pitcher's perspective, and it really indicated to me that this was a kid that gets it. And he was going to get there -- he hit the majors younger than Ervin Santana did, younger than John Lackey did, younger than Chuck Finley did, with for the most part terrific minor league numbers.

I don't mean to be insensitive in talking about his pitching or selfish in referring to my own previous blog entries, but this is the arena in which we as fans knew Nick Adenhart. We forge these connections with people we never meet or see outside of a uniform. And they mean something to us -- it's about us being part of something bigger than ourselves, of joining with others and cathartically sharing their joys and disappointments.

And if this incident has this kind of effect on us, I can't even imagine the effect on his family and friends. To watch this young man battle through injury and work hard and achieve his dream, and demonstrate such improvement and progression in his chosen life of work, to have the effect he seemed to have on those who knew him, and have that all seized by an act of such randomness and horror ... I cannot imagine it.

Condolences to all who knew and loved Nick Adenhart. 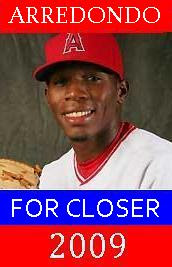 As linked at Halos Heaven:

What Teixeira has done, according to Angels hitting coach Mickey Hatcher, is change the culture of hitting in Los Angeles. He's taught teammates to be more patient, to take walks if the perfect pitch to hit isn't there.

"He definitely adds a lot to our lineup with that on-base percentage; a guy that works the count," Hatcher said. "It's good for some of my players to watch that. He's brought that into our lineup. Ever since we got him he's had a lot of big hits for us. He gets on base to help us create more runs. He plays unbelievable defense, and I think that makes our pitching staff that more confident. He's just fun to watch."

So the rest of the Angels did walk more often after Teixeira was acquired than before. By 0.32% walks per plate appearance. That's a difference of seven walks.

I'm certain Scott Boras will include this in the portfolio he submits to teams seeking Teixeira's services this winter.

So it says here our boys have traded Casey Kotchman and Stephen Marek for Mark Teixeira.

I am both sad and hopeful about this. Sad because I really like Casey and think he's going to be a productive hitter over the rest of his career (I'm betting on his June and most of July this year being an aberration), hopeful because Teixeira is an improvement and Marek isn't a huge loss. I don't really know if I see the Angels re-signing Big Teix after this year, so, Kendry Morales, you better be ready come 2009.